Here is my first experience with the ADALM-PLUTO:

What is in the box?

Note: You need a USB charger to power the ADALM-PLUTO. It has two Micro-USB connectors, one is for connection to the PC, the other is for the power supply!

You just need to type these two commands on the PUTTY remote connection (note that on the telnet screen, the user is “root” and the password “analog”:

Tried DATV-Express: AWESOME!!! This tool alone makes the purchase worth it. Being able to generate a DVB-S/DVB-S2 transponder that you can use to test SAT-Receivers without having access to a dish is amazing, especially considering that the hardware costs just 90 Euro! I have several Dektec Modulators, which cost a few thousand Euro (well, they support much higher bandwidth and functionality, but that is not the point).

I did have some issues with DVB-T, as the two field meter I tried only support 6, 7 or 8 MHz bandwidth. The ADALM-PLUTO does not support a continuous stream at this rate, so I couldn’t test it further. 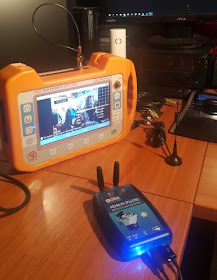 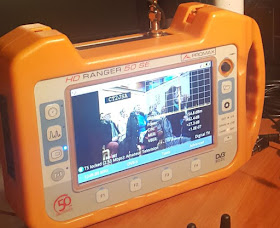 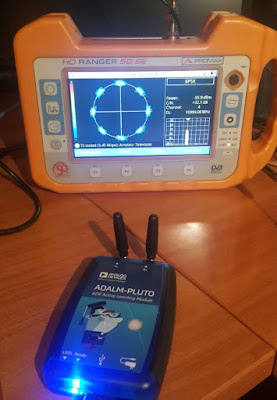 Much potential for the ADALM-PLUTO (“Pluto SDR”), at a great price but with an unacceptably high waiting time. This seems understandable, because the demand must be overwhealming. I cannot imagine this tool being actually used at schools, as you simply cannot get hold of it.

But I predict that many cool software applications will emerge for this product, once it is more easily obtainable.